The Gospel Encounter of the Apostle Paul (Part 1)

Last week in our “Gospel Encounters” adult Sunday School class on February 3, 2019, we started a multi-part study on transformative experiences of the Apostle Paul, formerly known as Saul of Tarsus, on the road to Damascus. These were the notes I took during our class discussion: 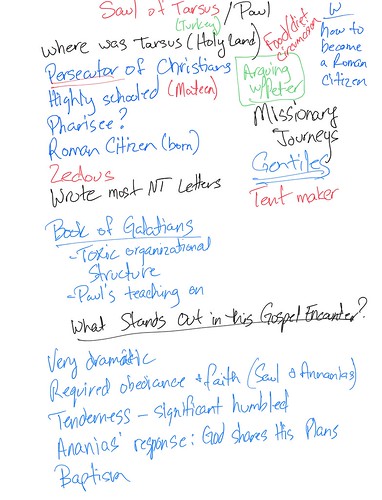 “Notes from the first part of our study of the Apostle Paul” (CC BY 2.0) by Wesley Fryer

We started by using the KWL strategy about Paul’s life and conversion: What do we KNOW, what do we WANT to know, and what have we LEARNED?

Some of the things class members shared that they know about Paul, his life and his conversion to become a follower of Jesus were:

Things we WANT to know include:

We read the 9th chapter of the Book of Acts from the New International Version, which is the first of three accounts of Paul’s conversion which are included in Acts. (The others are in Acts 22 and Acts 26.) After reading this chapter, we watched the 5.5 minute video, “The Road to Damascus – Saul Takes his Journey.” Since this video was published by the Mormon Church, I shared the same disclaimer I have before when sharing Mormon videos: Some of the videos shared by the LDS church (like this one) are outstanding, but my use of them in teaching does NOT constitute an endorsement or recommendation of LDS theology.

After watching the video, we discussed in small groups and then shared together things which stood out for us, after reading Acts 9 and watching this video. Some of the standouts were:

This coming Sunday (tomorrow) we’ll continue our study of Paul, his conversion experience, and the lessons we can glean from this powerful Gospel encounter with Jesus Christ! 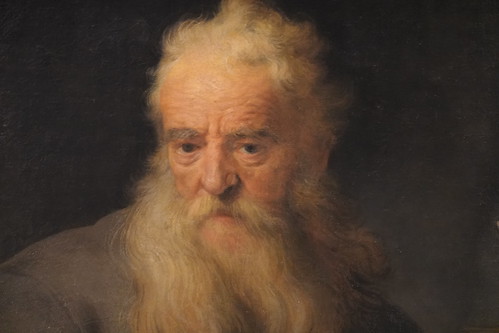 Gospel Encounters: Sharing our Journey of Faith to Jesus

Today in our adult Sunday School class, continuing our focus on both historical and contemporary “Gospel Encounters” with Jesus, I shared my personal testimony as well as a framework for “Sharing our Journey of Faith to Jesus.” This is based on a four part framework explained on our church‘s new website, “7 Core Practices,” detailed in the post from August 2018, “Going Deeper Into Your Story.” Here are the slides I used during today’s lesson.

I referenced a video about part of my testimony which I recorded and posted to YouTube in September 2011, titled “God Answered My Prayer in Pilot Training.”

I initially wrote about this on my professional blog in August 2006, before I created this separate space as my “Christian blog.” It was initially named “Eyes Right,” before I changed it to “Pocket Share Jesus” to align with the “Digital Witness for Jesus Christ” book and evangelism empowerment project.

This was the first time I shared parts of “my story” publicly which followed the events described in the above video. Those experiences from my life in February 1994 are likely things I will never put online and share digitally, but I am glad to have an opportunity to share them in person with others with the hope and prayer they will serve as an encouragement which points others to Jesus Christ.

I hope and pray today’s lesson highlighted the ways God has and continues to be active in my life and the life of our family. I also hope it was an encouragement to us all to share our own Gospel story with others. Check out 7corepractices.com for more inspiration and practical suggestions about ways we can serve and share Jesus Christ in our homes, workplaces, and communities. Also check out www.dw4jc.com for suggestions and strategies for how we can share scripture, our stories, and our witness of God’s Holy Spirit being active in our lives using digital media. 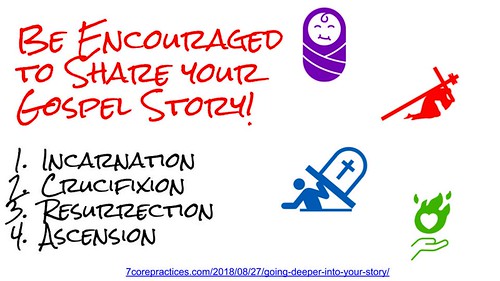 * Added 27 October 2018: I shared a modified version of these slides, with a few photos from pilot training which I dug out of our garage, in a presentation for our Friday Morning Men’s group on October 26, 2018.

These are my slides for the Friday’s men’s group lesson I’m teaching on the final chapter (“Supernatural Church”) of Francis Chan’s 2009 book, “Forgotten God: Reversing Our Tragic Neglect of the Holy Spirit.” Thanks to my mom who gave me a scrapbook from my freshman year at the Air Force Academy this week. I used the free Google iPhone app PhotoScan to scan several photos from basic training and that fall at USAFA, which I incorporated into this presentation and slideshow.