I created this sketchnote during a sermon shared by Jen Howat at our church on August 22, 2015. The focus verses for her sermon, titled “The Simple Life,” were Acts 2:42-47. This is from the Amplified Bible.

“And they steadfastly persevered, devoting themselves constantly to the instruction and fellowship of the apostles, to the breaking of bread [including the Lord’s Supper] and prayers. And a sense of awe (reverential fear) came upon every soul, and many wonders and signs were performed through the apostles (the special messengers). And all who believed (who adhered to and trusted in and relied on Jesus Christ) were united and [together] they had everything in common; And they sold their possessions (both their landed property and their movable goods) and distributed the price among all, according as any had need. And day after day they regularly assembled in the temple with united purpose, and in their homes they broke bread [including the Lord’s Supper]. They partook of their food with gladness and simplicity and generous hearts, Constantly praising God and being in favor and goodwill with all the people; and the Lord kept adding [to their number] daily those who were being saved [from spiritual death].” 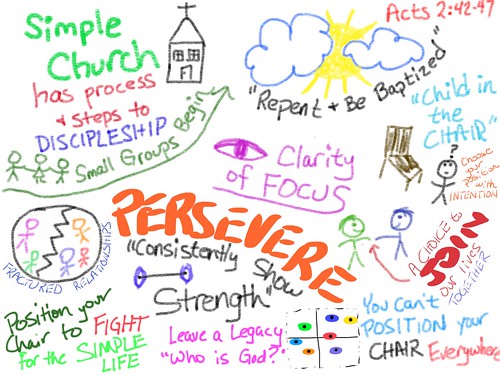 This is a narrated sketchnote I created by importing the video of my sketchnote, from Procreate, into iMovie. I slowed it down four times to give me more time for the narration, which is about two minutes long.