As I’m continuing to teach and lead the class, “Curiosity and Questions: Jesus and Science” this year, I’m enjoying the YouTube recommendation engine (in moderation, of course) to help me discover other videos I can share and use in class as well as outside of class as ‘extra recommended media / videos.’ This morning YouTube helped me find Dr. David Eagleman’s (@davideagleman) 2016 presentation from PopTech, “GOD vs NO GOD – And the Winner Is?” It’s 20 minutes long. In the presentation, David makes some excellent observations about the awe and wonder with which we can (and perhaps should) regard our universe and our amazing human bodies, especially the human brain. He misses, however, some key perspectives about “knowing and authority beyond science,” however, and it is to those topics I want to turn in this post. Before going further, however, I recommend you watch his talk:

It’s good to be reminded of The Hubble Deep Field photograph, which is staggeringly beautiful and mind blowing in its implications for not only astronomy and science but also cosmology and faith. Created in 1995 as a composite image from a very small portion of the night sky using the Hubble Space Telescope, the Deep Field image powerfully conveys how vast our universe is, and how little we can literally glimpse of it from our position on earth on the outer rim of the Milky Way galaxy. It’s truly an awe-inspiring image that can be a catalyst for wonderful conversations about the origins of our universe and BIG questions of faith as well as science. How did we get here? Did God create all of this? How can we know about things like “Who created the universe” or “Why are we here?” “Are we alone in the vastness of space?” Science can encourage and provoke us to dive into these questions, but ultimately, there are a number of questions “modern science” (as we’ve learned to understand it the past 400 years of human history) can’t answer. 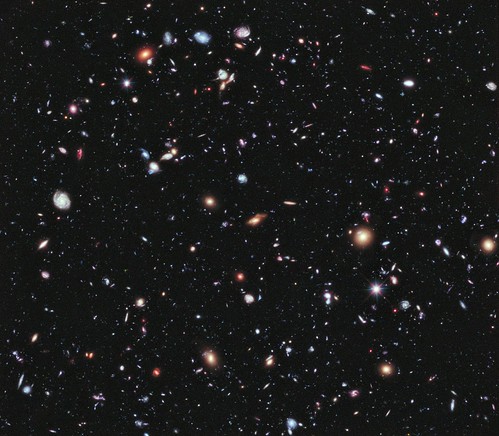 One of the lessons I’ve enjoyed sharing with my 5th and 6th grade students this year involves creating and sharing InfoPics. One of my 5th graders, Masha, commented to me last week how looking at images of the universe and our galaxy “makes her feel so small.” This is one of Masha’s InfoPics she shared on our class Seesaw blog. Her expressed sentiment is laden with cosmological and theological questions. It is to these questions as well I’d like to turn now.

In his video, ““GOD vs NO GOD – And the Winner Is?”, David Eagleman correctly points out the folly in dogmatically claiming that a creation story from any culture fully apprehends and describes the processes and observations of cosmology. Here are a few important elements he either omits or gets wrong in his talk about beliefs, science and the origins of our universe.

Creation Stories Were Not Crafted to Compete with a Scientific Worldview

David Eagleman conflates the Biblical creation story of Adam and Eve in the Garden of Eden with the Kuba Kingdom’s Creation story in the Congo. and his connections elicit laughter from his audience. The paraphrase of his message here is, “How can any rational human in the 21st century actually subscribe to such a patently incomplete and false story of cosmology?” Eagleman fails to grasp, or at least communicate to his audience in this 2016 presentation, that the Jewish creation stories (because remember, there are two of them in Genesis) were not formulated and should not be interpreted today to be comprehensive texts summarizing all that is known and needs to be known about cosmology (the origins of the universe). The Bible as a whole, and the Pentateuch specifically, are not “books of science.” Portraying Biblical cosmology as a “fail” because we have learned so much observationally about our universe in the past 400 years risks misunderstanding the value and purpose of these stories and literature. For more on these perspectives, I commend “The Bible Project” videos to you and specifically the six minute video, “The Book of Genesis – Part 1 of 2.”

Not All Faith Derives from Predominant Culture

David Eagleman misses another extremely important point about faith and belief in this talk, when he tries to explain to his audience how we understand where religion comes from. Eagleman asserts that predominant cultures imbue faith and belief, and this cultural transfer of cosmological perspectives is understandable from an anthropological / scientific perspective but not valid from the viewpoint of scientific truth. Eagleman’s observation can be more accurately stated this way: MANY people DO adopt their beliefs and faith perspectives from their parents, family, and predominant community culture. HOWEVER, some people “break” with their family and culture, and take on beliefs which are different and even bear a huge physical cost. The testimony of our former pastor, Mateen Elass, who grew up as a Muslim in Saudi Arabia and eventually came to faith at Stanford University after traveling to India and studying Buddhism intensely is a case that comes to mind. The faith of C.S. Lewis, who documented his journey from atheism to Christianity as a follower of Jesus in his book, “Mere Christianity,” also provides a counterpoint to Eagleman’s assertions about the origins of faith. Francis Collins, the leader of the Human Genome Project and author of “The Language of God,” grew up an agnostic but came to faith in Jesus. Orthopedic surgeon Curt Gruel, who spoke to our class on September 15, 2019, has a similar story of “being a disciple of science” but through his lived experiences coming to know and follow Jesus Christ. A couple weeks ago we heard from a Christian missionary working in Iran about the ways God is revealing himself to Muslims through visions and dreams today. Here’s the point Eagleman misses, and it’s very important when we discuss faith and cosmology. Not all faith and beliefs about God derive from a predominant culture / environmental pressures.

We Have Sources of “Knowing” Outside of Science

Another vital point which David Eagleman missed in his 2016 talk is the idea that as human beings, we have sources of “knowing” outside of science. Certainly science has tremendous value to us as a systematic way to not only understand our world but also creatively project our own ideas into it. Engineering is the application of scientific principles to design and build structures as well as solve problems. Your reading of this blog post right now is the result of technological innovation built on scientific principles and understanding. Yet the replicability of experimental conditions in a controlled setting / laboratory only provides PART of the ways we know and understand reality as human beings. Our ‘lived experiences’ can inform us and also reveal to us fundamental truths about our world, ultimate reality, and God. My own journey of faith, which included a dramatic ‘near death experience’ in undergraduate pilot training in the US Air Force, is a part of my own story and powerfully shaped my acknowledgement of and understanding of God’s reality in our world. Curt Gruel shared a similar “journey of faith” story with our Sunday School class in September. These experiences are not scientifically replicable in a lab setting where variables are tightly controlled. They are still, however, valid “ways of knowing” and point to the importance of understanding that “scientific knowledge is not the only type of knowledge which exists or points us to truth.”

One of the important points author and scientist Francis Collins makes in Chapter 4 of his book, “The Language of God,” is that Christian faith or any other faith in God as the creator of the universe should not hinge on a “God of the Gaps” understanding. In other words, we certainly DO regard the universe with awe. Our world IS still filled with mysteries which we do not understand, to the extent that we don’t have comprehensive or even “good” insights into the processes which define and explain phenomena we observe.

I’m not sure if there is a more generally acknowledged term for this, but it seems this dynamic throughout history has gone like this: “The more things we can NAME scientifically, the less space we have in our minds for God, his active role in our lives and world, and even His very existence.” In other words, as “the gaps” in our understanding of our world and universe have started to “fill in” through scientific inquiry and discovery in the past 400 years, we’ve (naively) convinced ourselves that we no longer need God. That God is a human, psychological and cultural creation. As Nietzsche said, “God is dead.” The Enlightenment and the scientific revolution which followed it have provided “science” as a replacement for religion and faith.

Thankfully, the God of our universe is not dead, and our perception of Him, our understanding of Him, and our faith in Him and his goodness need not hinge on a “God of the Gaps” understanding. Charles Darwin himself alluded to this in his concluding sentences in “The Origin of the Species,” when he observed:

“There is grandeur in this view of life, with its several powers, having been originally breathed by the Creator into a few forms or into one; and that, whilst this planet has gone cycling on according to the fixed law of gravity, from so simple a beginning, endless forms most beautiful and most wonderful have been, and are being evolved.”

Charles Darwin, concluding The Origin of Species, as quoted by Francis Collins in “The Language of God,” pp. 98-99.

In his 2016 PopTech talk about God and science, David Eagleman omits this important perspective that acknowledgement and understanding of, and faith in God, can be compatible with the rhetorical answer to scientific questions, “I don’t know.” One does not have to be a “Possibilianism,” to have and regularly express this kind of humility in the face of the universe’s mysteries. One can, in fact, be a Christian and follower of Jesus. Humility and acknowledging our inability to ever fully apprehend the fullness of God’s reality is, in fact, an essential in the Christian life.

‘He has shown you, O mortal, what is good. And what does the Lord require of you? To act justly and to love mercy and to walk humbly with your God. ‘

Scientific Uncertainties and Discoveries Need Not Threaten Our Faith in God

Finally and importantly, David Eagleman omits the idea in his talk that scientific uncertainties and discoveries need not threaten our faith in God. This perspective was summarized well by Saint Augustine, who lived from 354 to 430 AD. He wrote:

“In matters that are so obscure and far beyond our vision, we find in Holy Scripture passages which can be interpreted in very different ways without prejudice to the faith we have received. In such cases, we should not rush in headlong and so firmly take our stand on the one side that, if further progress in the search for truth justly undermines this position, we to fall with it. “

Saint Augustine, “The Literal Meaning of Genesis,” translated and annotated by John Hammond Taylor. Quoted by Francis Collins in “The Language of God,” page 83. 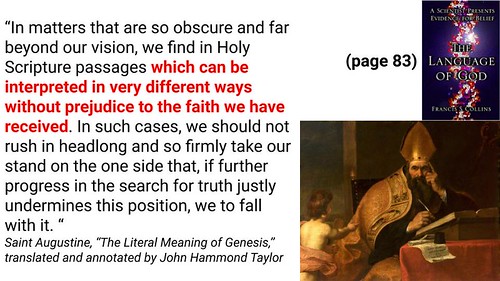 “Saint Augustine on “The Literal Meanin” (CC BY 2.0) by Wesley Fryer

As David Eagleman encourages us in this 2016 video, we can and SHOULD be in awe of our universe and the mysteries it holds. We need not abandon faith and our belief in God, however, because we realize religious texts and Biblical stories fail to fully capture scientifically understood observations of and theories about our cosmology.

For more thoughts and resources related to these topics, I encourage you to check out the public website for our Sunday School class, “Curiosity and Questions: Faith and Science.” If you have feedback about this post or that site, you can leave a comment for me below, reach out on Twitter to @wfryer or @pocketshare, or use my online contact form.